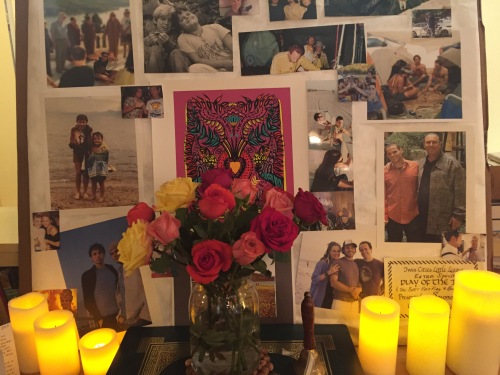 This is the evening that I find difficult every year. Because it is  now early afternoon in Bangkok the same time that marked the last moments of your life, Solomon — January 31, 2012. Yet, after I write this and put in the pictures, everything starts to shine with your light. When I’m finished, I can sleep well.  This is a celebration and Remembrance.

If I die, survive me with such force

That you waken the furies of the pallid and the cold,

From south to south lift your indelible eyes,

From sun to sun dream through your singing mouth.

I don’t want your laughter or your steps to waver,

I don’t want my heritage of joy to die….

And these words came to me soon after you left us, Solomon.

Take me with you, Mom, into your life, and what you do. Let me bring the balance and glide of boarding into the continual challenge of your everyday life. And please keep loving Nicole…..

My gift to YOU from all of us who knew you is to live the message.

I recently re-read an email you wrote May 20, 2004 after finding the grave of your great-great grandfather Salomon Salomon in Germany.

“…I decided to be adventurous and jump on a train to the town of Langenfeld without any prior inquiry… When I got off the train I started walking. It turned out to be down a long footpath. And just when I thought I was lost, I happened upon it, a very small cemetery, not more than 30 gravestones. I went to the door and it was locked, so I waited until the coast was clear and jumped the fence. I had come this far, so I couldn’t be stopped now… Once inside it was sort of secluded. I walked in and immediately found the gravestone. (It looks very different than the others). I sat for 15-20 minutes and meditated on the spot. Afterwards I felt more in touch with my German heritage and family history. I return to Dusseldorf tomorrow to play a few more gigs this weekend then its back to SF on Wednesday… Hope you are well, Much Love…”

I found this photo of you, Solomon and your niece, Oona. She is going on 8 now and is skiing at Tahoe with  Ammon, Laura and her sister, Maeve, as I write this. I’m sure at some point she’ll be taking up snowboarding with the intoxicating “balance and glide.” Maeve is going on 5. You never knew her. Here they are eating ice cream.

Also the delightful Samantha. We love her and see her and Nicole quite often. Ryan and Nicole are living full and exciting lives. Here she is with “Baba.” She just learned to say his name! This was the bell at the end of the meditation celebrating your life the other night.

I wish you were here to see Golden State Warriors Basketball. Four of them made the all-stars! Steph Curry, Kevin Durant, Draymond Green, and Klay Thompson. Your dad and I have been watching this glorious team win almost all the games. I picture you DJ’ing as you did and even getting us into a game or two, now that the tickets cost much more than they did when you were there like this picture from your booth. 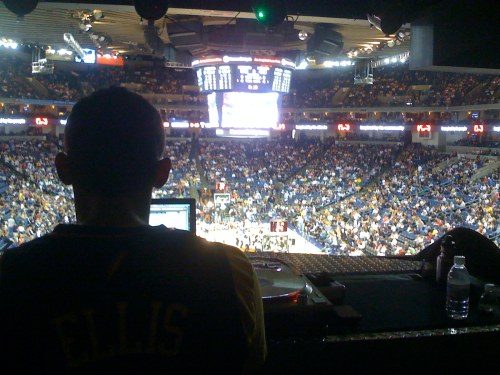 Tomorrow Girija and I will visit the bench ~ 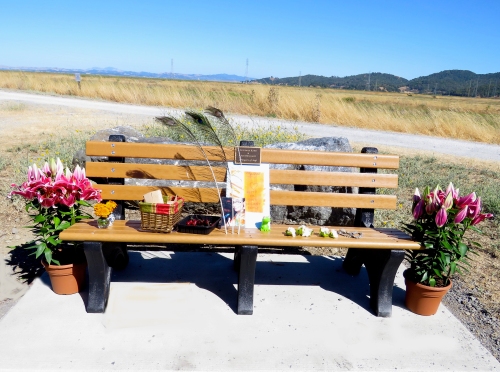 This is the bench the Brilliants and Kahns dedicated to you and Jon Brilliant, out where the water-birds and cattails are. Dad is in Germany, landing in Frankfurt, then Berlin in a few hours. He sends his love. We miss you and celebrate your extraordinary life, now and always. With love from Mom 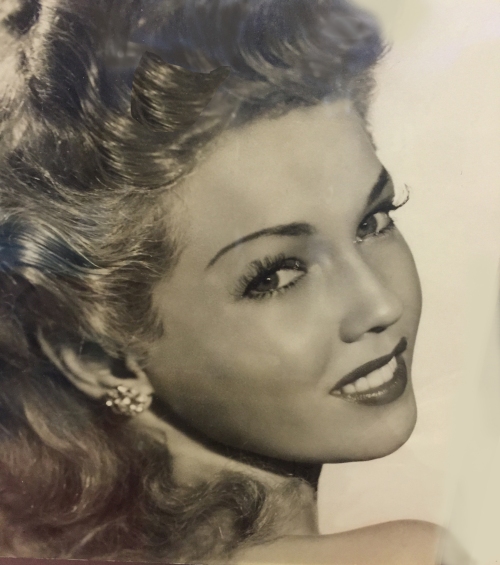 Gloria came from Cameguey, Cuba a middle child of 6. Deep in a childhood of poverty, she joined the circus, then became a dancer. Her talent took her to America where she toured and was in the movies as a ball-room dancer, like Ginger Rogers. There is a film clip of her dancing in the clouds in a diaphanous dress, her blond hair flying, beautiful, graceful, mesmerizing.

She got a place in the mission of San Francisco, sent for her 13 year old sister, Carmen, and took care of her. Meeting Frank Haggerty changed her life. A jazz guitarist, he played with Tommy Dorsey, had made recordings with Frank Sinatra and Mel Torme. They married and suddenly, she was a Marin County housewife, then a mother in the 1950’s— with 3 kids. In those days, there was no way she could continue to perform or open dance studio, as she would today. She became a citizen September 7, 1955. She was a wife and mother.

I met Gloria in 1969, 1970. She always looked great. Spent time on her beautiful face and hair. She was never a housewife. She was the mother of my boyfriend, Terry. We came over to tell her I was pregnant, so she was going to be a grandmother. She was thrilled with the news, but then husband, Frank came home, having had a few drinks, in an ugly mood, and still mad at Terry for being a Rock Guitarist — music he despised. He started shouting at us, and I remember Gloria yelling: “Run Terry, Run!” We high-tailed it to the car and screeched out of there. Later I made friends with Frank, he liked me and enjoyed being a grandfather.

I gave birth to Ammon in the cabin in Lagunitis that Terry and I shared. We had a midwife as well as Dr. Whitt. It was the beginning of home delivery birthing. Gloria held my hand for hours with such understanding and sweetness. She knew what labor was like. The first words Ammon heard from her, as he was born were “You are going to make some girl very happy!”

She would come pick him up in her red ford truck and take care of him for a few hours, as I now do for Ammon’s girls. She would sing A roo roo platanous verdes, a roo rook ay ah-rah-jo and trucked and he trucked and e fatty-fat-pig, home again home again jiggity jig, rocking him, smiling her infectious smile.

After a couple of trial separations, she left Frank and began to live her own life. I love this story. Gloria was in her early 60’s. She was at the Forest Lake Golf Club and she saw a handsome man across the room. “Oh, my God!” she said. “What’s wrong?” said the bartender. “Look at that man standing over there.” The bartender introduced them, and Jim Byrne asked her to dance. They dated for two years, and just before Thanksgiving, when he had been a widower for 10 years, Gloria said to him: “I love you. By now you should know if you want to marry me or not. No matter what, I’ll always be your friend.” One night his son, Jimmy came over for dinner. “Jim said to him: “Jimmy, Gloria and I are going to get married.” That was it!

We attended the wedding with the Haggerty clan, along with Jim’s five children and their families. The family photo at the church showed dozens of relatives. What a celebration! The next 26 years were the happiest years of her life. She had met and married the man of her dreams. They traveled to Europe, Hawaii and other places.  They played lots of golf. Gloria, a natural athlete, hit a hole-in-one. Then another. Jim died in 2011. She missed him terribly, but in her late 80’s still played golf and even walked with me around her hiking lake. She moved to Brookedale Place in Northern Santa Rosa in 2012, and made many friends there. Her daughter Isa, spent a great deal of time with her as they had always been close and even traveled to Cuba together once. Isa became her main caretaker. As she became troubled with illness, her spirit remained positive, an example to us all.  Her wit continued to make us all laugh.I was fortunate to be at her bedside the day before she died, and felt that she would be welcomed with choruses of angels to the other side.

There were rose petals on one of the greens at the golf club at her memorial there last weekend. She asked Isa to sprinkle her ashes on the golf course at the first hole near the stream. She hated hitting the ball in the stream, but, with characteristic humor, wanted her ashes spread there so she could watch other people losing their balls in the water! She also asked Isa to keep the family together. 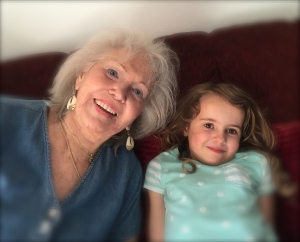 A few months ago I took Oona, her great granddaughter to see her at Brookedale. She was 93 years old.

Oona was 5. It was such a sweet moment to be in the room, witnessing the ancestral ladder linking, Gloria, Terry, Ammon, and Oona— 4 generations. May Oona and Maeve inherit her resilience, bravery, athleticism, loving kindness, beauty, joy and quick unforgettable one-liners. Today I opened the envelope I brought back from the memorial and out fell a charm with the words, “Grandma.” I am wearing it. Thank you Isa.

I love you Grandma.

Posted by Tea-mahm | Filed under Uncategorized