taking Solomon’s ashes to the Ganges!  Follow the purple line…..

The anniversary – one year– that marks the day Solomon died, is here. First, I want to thank all my friends, my close support team, Solomon’s dear friends who call and text me, asking how I am, and sharing their stories and humor; and the communities of good-hearted people who have held our family in their hearts over the last year. Big Thanks for that.  There seems to be much synchronicity and ease around this marker. As the mother of a child who died, the year is full of markers: memorial, birthday, wedding, Thanksgiving and Christmas. Each one a strong reminder of loss, for me and many others. Yesterday we honored him in San Rafael, but with Solomon there is always more.

As I write this I feel the enthusiasm and adventure so easily associated with Solomon Kahn.

It started with my dear friend Girija. She lost her son Jon just over a year before Solomon’s passing. He was about ten years younger than Solomon.We have met several times over the last six months. Mostly, I don’t care to talk about the loss, but with her – it’s been easy.

She will be in Bangkok on January 31. She told me she plans to  make offerings at a temple there – in Solomon’s name.

Jon Brilliant is smiling and tall — in the front row. Girija in the bright shirt…

Then she goes on to Delhi, where she will meet up with her close friend Suzanne and they will fly to Benaras (Varanasi, on the Ganges) and release some of Jon’s ashes to commemorate the second anniversary of his death. She offered to do the same with Solomon’s ashes, and will do that on the anniversary of Hazrat Inayat Khan’s passing, known as his URS or “Wedding Night,” when he left the earthly plane: February 5, 1927. <> This makes me fee so happy to know that once again, Solomon is taking someone he never met before (Girija) on an adventure!

Solomons’s ashes and 4 tiny photos – each representing a different visit Solomon made to Mother India – into the sacred waters there.  Here are the 4 photos that will be put in the Ganges…  Thank you Girija.

Sol at a cave in Deradun, India when he was about 8. 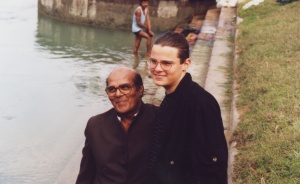 Solomon and Jagdish Mohan, his tabla drum teacher, by the Ganges when he was 15. 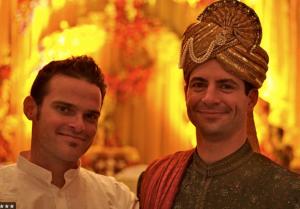 Solomon and Scott Kaiser at Scott’s wedding in India a few years ago.

On the 31st, Nicole plans to visit the Mountain, the place our son proposed to her. We will be in Maui, visiting Ram Das and feeling the beauty of the island on this anniversary of Solomon’s death. By reading this, you are with us. Take a moment to feel the blessing of Solomon is your life. Even if you didn’t know him, like my British friend who says he guides her with phrases like: Live Life fully. Have a good time.…

I’m getting better at it, Dear Solomon. One day at a time! Thank you for all you brought to so many —- and continue to do so, one gift at a time.

This week, my husband, Shabda, leaves for India to co-host the eighty-third year celebration of Hazrat Inayat Khan’s passing. One hundred years ago this coming September, the young Inayat Khan, founder of our Chistia Sufi lineage, left India to bring “The Message” to America and Europe. Both of these events will be celebrated February 5 in Delhi, India. In honor of this journey Shabda is making with many Sufi friends, I am posting an article I wrote for “The Sound” three years ago.

Since then, we have lost our sister Shanti Sharma, songbird of that beautiful time. Salam, Shanti, may you rest in peace!

It began to feel like an Indian wedding. Pale lavender cloth stretched over bamboo scaffolding. The entire front yard and driveway of La Sagrita Guest House vanished. White sheets tightened over a dozen rugs that hid the lawn below. We walked out the front door into a kind of outdoor marriage pavilion with sunlight throwing tree and bird shadows on walls of the tent. A vine of large green leaves wound up an inside tree. Light bars appeared on the white ceiling. The small sound system came to life as Shabda stood in the center and tuned his guitar, and Gayan his djembe drum.

The travelers circled up for the first of the Dances of Universal Peace. There were familiar faces and new ones; seventy-four people made up the India celebration team, at the 80 year Urs of Pir-O-Murshid Hazrat Inayat Khan. This was our dance hall; morning Raga room where Shanti (the master Indian Raga singer) offered early morning raga practice; gathering place where Taj Inayat shared insights, where Shabda indicated what the day might offer and what we might bring to the day; and shrine room where Tai Situ Rinpoche sat surrounded by flowers and said to us that freedom-from-wanting-more comes from (spiritual) practice.

We walked to the dargah (tomb and surrounding area), through the small cared-for park, down the street through Sundar Nagar neighborhood, past the Sweets Corner, and out into fast and hectic traffic and uneven walking terrain. After crossing the last “highway” we were in the “Nizamuddin” world (great Sufi saint), among goats and beggars, barefoot children carrying babies, pan wallahs and slabs of meat; close by the Muslim rose garland sellers, the smells of frying oil and spice. Bright little ones sing-song’d, “Hello, hello!” and after a few days, we passed easily down that familiar street.The stone-work of the dargah, the entrance and the courtyard with its serenity and order allowed us to exhale with a sense of home-coming. We climbed the stairs, left our shoes and placed our foreheads on the rose-scented cloth or cool marble of the tomb. We were here at last, as at-home as we’ll be in India.

Our program was ambitious. Our group, with Pir Shabda as leader, was host to fifty to one-hundred more Europeans, Americans, and Indians who felt the Inayti connection and came to the Urs to celebrate. A few days later, Pir Zia (grandson of Hazrat Inayat Khan) referred to the program and efforts as “unprecedented.” The concert hall was constantly packed, including the over-flow room and the outside chairs.

After a weekend of concerts came the day of the Urs, or “wedding day,” the anniversary of  Hazrat Inayat Khan’s passing, February 5, 1927. We gathered at the large tomb area of Hazrat Nizammudin Aulia on a beautiful warm sunny morning.

Pir Shabda was joined by Khawaja Hasan Sani Nizami, Pir Rashis ul Hasan Jili Kalimi, Pir Zia Inayat, Pir Sharif Baba, and Murshid Shahabuddin Less, Murshid Nawab Pasnak, and others. There was a strong women’s presence, with Dr. Farida Ali, guardian of the Hazrat Inayat Khan Trust advising Taj Inayat and myself what was the proper adab for women in a Sufi ceremony.The area, called Nizammudin, is open to devotees from all over India, as well as those who were there for the celebration. The qawwalis (dargah musicians who offer spirited devotional songs) began to sing, as they have for many years, and sweets were offered to all.  <>  Soon the Fateha (verse from the Qu’ran) was recited, the chaadar (cloth tomb cover) was blessed, then it was lifted and Taj and I each held an edge as the chaadar-carrying procession squeezed through the narrow lanes of the dargah onto the street while following the qawwalis to Hazrat Inayat Khan’s dargah several blocks away. Soon it was Taj, myself, Zuleika, and Zarifa in the front. Traditionally, it was a man’s privilege to lead, so we felt exhilarated breaking new ground. At the dharga steps, a European man darted in front of me to take the right corner. “Excuse me,” I said, “this year the women are leading, please step behind!” Shabda joined us and we placed the beautiful brocade cloth on the tomb, under the strings of marigolds and tuberoses. The qawwalis sang on, followed by a beautiful short kirana style vocal concert by Shabda, some words from Pir Zia and Taj, and finalized by everyone joining in Hazrat Inayat Khan’s sung zikr.  <>

<>   That afternoon, Khadija Goforth led a luminous Universal Worship service. After a courtyard meal for two-hundred or so devotees, we celebrated with Dances of Universal Peace in a long double oval just in front of the entrance to the tomb. Mevlevi dervishes whirled inside by the tomb. It was an amazing and fulfilling moment where Murshid Sam’s family brought music, dance, and joy in great measure, and many were carried by the wave of “love, harmony, and beauty.”

Like all beautiful Indian “weddings” this one seemed to go on and on. Tai Situ Rinpoche changed his schedule to come back a second time, Saraswati and Zuleika wowed us with beautiful dance performances, The Hope Project and The Memorial Trust school children performed theater and music. At the end, it began to rain.

Taj opened her last morning talk with, “It’s good to see your bedraggled, glowing faces.” She went on. “How do we live a life that characterizes Love Harmony and Beauty? …You are the embodiment of the answer”. Her words were the small piece of cake we took away from the wet tent on careful plates, certain that we would hold the sweetness of this celebration for now and time to come.