I am reposting this page. I feel it’s important today, perhaps more than it was then.

Marrakech Sufi Gathering: The Sidi Shiker World Gatherings of Tasawwuf Affiliates. I just returned from Morocco. The Royal Government paid for airfare, hotel, and food for a week. I was invited to present my poetry to a conference of nearly 2,000 Sufis. It doesn’t seem possible – but it’s true. I was there in the triple digit heat, sharing a tajine, heaped with rich and delicious food or an elevator with people from Lebanon or France.

In 1998, my husband, Pir Shabda Kahn, and I went to the Sacred Music Festival in Fez, Morocco as leaders on a “sacred journey.” We returned the next three years with groups of American Sufis and visited sacred sites and caravan-ed on camels in the Sahara. Our good friend, who made this possible, was a man named Dr. Sidi Ahmed Kostas. Now he is the assistant to Dr. Ahmed Toufiq, the Minister of Religious Endowments and Islamic Affairs for the king. Around the Summer Solstice June 21, 2009, Dr. Kostas and Dr. Toufiq got permission from King Muhammad VI to assemble a Sufi Conference in Marrakech July 10-12. They had less than a month! I got a personal phone call from Dr. Kostas while in England, waiting to go to Germany and teach from my forth-coming book: Untold: A History of the Wives of Prophet Muhammad. Dr. Kostas wanted me to read my poetry at the conference. I 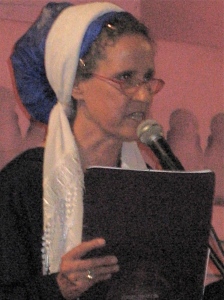 Dr. Kostas set out to invite Sufi groups from all over the world and on 10 days notice almost 2000 people accepted the all- expense-paid invitation of airfare, beautiful accommodations and banquet-meals – from Minister Toufiq on behalf of the King of Morocco. 100 Nigerians. Chinese and South Africans. Americans, Europeans, Middle Easterners. It was the Moroccan travel agent’s nightmare. The conference was tri-lingual, Arabic, French, and English, with simultaneous translation for all presentations. The weather – hot as West African summer; the hotels were well air-conditioned. Marrakech is as sophisticated as it is beautiful.  The reason for this whirlwind was echoed in the words of the presenters. Sufism is recognized as a hedge against fundamentalism in Morocco. Sufi teachers and their followers hold the notion of the true meaning of Islam as ” the inner state that causes the feeling of peaceful surrender to the protection, safety, and healing of the Divine.” The Sufi is one who carries the essence of love, harmony, and beauty, and pays attention to transforming the nafs (ego). He or she may be a warrior of the inner jihad (a phrase that means to contend, to challenge the unrefined self). Sufis are known to stand together and chant, la illaha illallah (There is no Reality but The Reality,) celebrating this in joyful assembly. My definition of Sufi mysticism is: “It is the fragrance over the flower of religion.”

The king, like his father before him, recognized it was in Morocco’s best interest to promote this fragrant fraternity for benefit, and bring together Sufis from everywhere to foster connection and mutual brother-sisterhood.

The Ministry further seeks to fund and promote publication and education toward this gentle reflection of Islam in the culture of Morocco.

Of the 2000 delegates, there were less than 50 women. Three of us presented; a Moroccan scholar, Dr. Zakia Zouanate, and an American scholar and long-time Sufi friend, Murchida Tasnim Fernandez, and myself.  Several times at the break I was the only woman in the vast, hotel restrooms. The women were a tiny minority, yet

we made our presence felt. I had instant sisterhood with the few women I saw, nodding or introducing myself to Laurence from Paris, Ikram from Fez (in the photo below), Hafsa from Scotland, Fatima from Nigeria, Ora from New York.

My poems were translated by Dr. Kostas, as we stood on the stage at the banquet close to midnight Saturday night. Dinner had just ended, but nights in Morocco seem to go on forever. Before I began to read, I thanked the King. (He was absent, but it’s not often you get chance to say, “I want to thank His Majesty, King Muhammad VI for his generosity ….”) Afterward, Dr. Toufiq expressed his appreciation to me for my work on the Mothers of Islam, and told me I was always welcome in Morocco. My friend and fellow poet Abdal-Hayy Moore read his poems as well.The next day, Arabic-speaking delegates called out to me in Arabic, smiled warmly, gave thumbs up or offered me their business cards.

Abdal-Hayy Moore and me at our poetry reading

The conference swag was amazing; the women received silver or gold brocade slippers and a stylish silk scarf; the men, an elegant white hooded burnous, a briefcase, leather slippers, an Arabic language Qu’ran, and a beautiful sacred manuscript book.

Because my name ends in a consonant, an Arabic “male indicator,” and my husband’s with the female “A,” our invitations read His Eminence Tamam Kahn and Her Eminence Shabda Kahn. Nice. 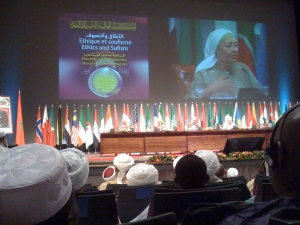 On Saturday, the international press was everywhere. I gave two interviews, one to Italian TV and the other to a journalist and photographer from Brussels. You could spot the women reporters in their casual hot weather clothes, while most delegates wore traditional robes called djelabas and some kind of head covering. The Nigerians dazzled – in vivid colored caftans and hats. The day we went to the desert, it was well over 105 degrees and all who went – nearly 2000 of us – ate lunch in tents with ceiling fans and a couple portable ACs. We were there all day. The women staged a take-over and claimed the large tent designated for us and provided with pillows, couches and a computer. Sleepy men left and went elsewhere. At 7:30 we all returned for dinner in a bus caravan accompanied by a police escort all the way into Marrakech, flashing lights and all.

The night before, we were driven to a palm garden just outside the city and entered the circle of tents on red carpets, lined with drummers and men playing long trumpets. We sat in chairs at tables of ten in twelve traditional Moroccan tents placed around a carpeted open space, desert style. The couscous and chicken arrived with a procession of tajine-carrying waiters. After dinner we listened to live Turkish music as the moon rose over the dark palms.

I return with new names and e-mails in my address file, my

luggage perfumed with amber from the souk, and most valuable –the gift of friendship. In this time when most people in the world are withdrawing financial largesse, when programs falter, I was conscious of how generosity on the scale of this event may bring expansion, blessing and God willing, insh’allah, the peaceful benefit of the open hand and heart.

Morocco, may you be peaceful and strong.