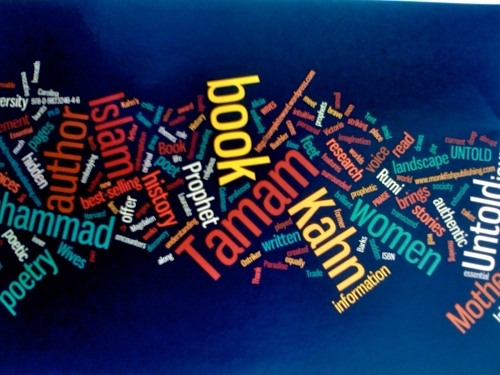 ~ UNTOLD was translated into Indonesian and may be in bookstores there as “Untold Stories,” Kaysa Publishers, and is being considered by Garnet Press, UK.

Q: What prompted you to write about the wives of Muhammad?

Tamam Kahn: As I traveled in North Africa and the Middle East, I felt authority and earthy power from the women who recited sacred words and sang poetry about Muhammad and his family. I wanted to discover if Muhammad’s wives had that same fierce, elegant energy. I began to read about them. I found that – according to traditional history – they did.

Q: Why do you feel this information is valuable or necessary at this time? What does it have to teach us?

Tamam Kahn: This book is meant to balance History and Her-story.  My wish is that the women in these pages may emerge as vivid individuals vocalizing the first years of what came to be Islam; that they will replace the stiff and submissive stereotypes the media often displays. In this book, we see that Muhammad was married to women born into Jewish, Christian and pagan faiths. “Untold” may inspire us to be curious and keep a flexible attitude, and if we do, we may discover all people have the same hopes, dreams, fears, and disappointments.

Q: Do you consider yourself a Muslim?

Tamam Kahn: I would call myself a spiritual seeker who regards Islam as the path of peaceful surrender to the One. For me, a Muslim is a person who walks that path. This was the “Islam” embraced by the women I write about. I am a follower of the Message of Divine Unity as exemplified by the great Sufis such as Rumi, Hafiz, and Rabi‘a of Basra. They carry a sacred outlook not limited to the form, the time, or the place.

Q: How have Muslims responded to your research and publication?

Tamam Kahn: A California Muslim woman hosting a local radio show wrote me that Untold brought these women to life in a way that no standard biography did. Through the poetry, she now imagined them as real flesh and blood women who were courageous, jealous, and fierce – in a very human way. For those who question my right to write about the Prophet’s wives, I would say I have great respect for each woman and admiration for the life they shared. That respect has opened doors that made this book possible.

Q: Does your book have a message for Muslims?

Tamam Kahn: As-salaam ‘alaykum. This book greets you on the path of peace. Come and enjoy the stories of your Prophet and his family.

Q: Does your book have significance for non-Muslims?

Tamam Kahn: This book is about a forgotten piece of history that needs to be brought out and honored. But for me it is not about Muslim and non-Muslim. It’s about our human family and the strength of women. This book may bring ease to a mother whose children attend school with Muslim children, the shopper served by a grocery checker in a scarf, the office worker whose boss has a Muslim name. CNN tells us that nearly one in four people in the world today is a Muslim, although Fox Network said it was one in five.

Q: How has the process of researching, writing, and publishing Untold changed your life?

Tamam Kahn: I’ve spent my life changing my life, so this is just another chapter.  There is a big difference between holding a manuscript and reading from your own book. This book seems to have “a life of its own.” I feel like I’m just tagging along. The directive that these women need to be known is an important one. From the opening poem: “I am here with a message: conversation with these women will never end.”

Q: Can you tell us about the research for Untold?

Tamam Kahn: I was hooked as soon as I began to read contemporary authors, Karen Armstrong and Martin Lings. From there I went to the oldest sources such as Ibn Ishaq. I traveled to Syria and received my own library card from the Al-Azar National Library in Damascus. When I’d researched and written a few chapters, I met with Islamic Scholar Arthur Buehler back in America, and he was moved by what I was doing and offered to help, not only by correcting the Arabic, but also suggesting early scholarly material that was respected in the genre of what is called “the hadith literature.” In that way I had the advantage of an academic checkpoint.

Q: Talk about the form you use in this book – narrative prose interspersed with poetry.

Tamam Kahn: At one point I had seventy poems and notebooks of research on the wives and daughters of Prophet Muhammad. I thought I’d find someone to write the back-story. I asked the wonderful master writer and Poet Laureate of North Carolina, Fred Chappell, what he would do if he were in my place. He suggested a “prosimetrum.” No one I knew was familiar with that term. It was used by Boethius in the fifth century – in his Latin Consolation of Philosophy. Boethius placed poems – each like a tiny well – in the prose narrative thread. The Consolation influenced Western Medieval thought, Dante and Chaucer. The form is generally not in use today, but it served my purpose beautifully!

Q: Who should read this book?

Tamam Kahn: This book is for anyone who wants to transcend stereotypes about Islam. Untold paints this early history with a bold, broad stroke, including Prophet Muhammad’s close and colorful contact with Pagan, Jewish, and Christian women who became his wives. Like Reading Lolita in Tehran, Untold depicts Muslim women in a new light, with focus on their intelligence and creative outlook. Book clubs will find this is an optimistic book that empowers women –– the ones who are in it and the ones reading from it! After studying Untold in an Islamic Studies class, one student was inspired to write a term paper about the first wife, Khadija. I leave a trail of research markers, so the book can be enjoyed as simple biography or questioned and investigated further. Untold is for people who discover that they want to know –– who are these women?

For more information or to arrange an interview with Tamam Kahn, please contact: <tamam@completeword.com>